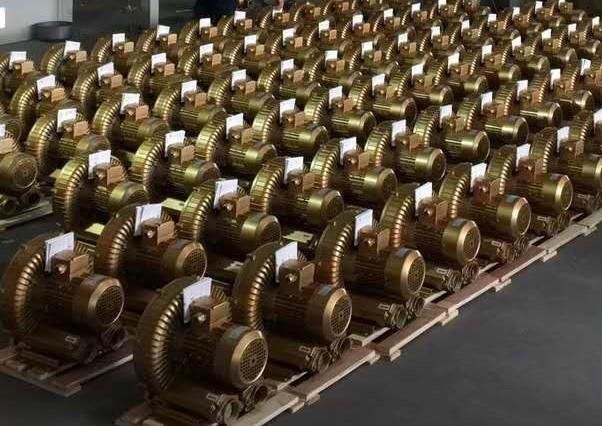 air blower
1. Labyrinth seal
Labyrinth seal is also called labyrinth seal and comb seal. It is widely used in fan products. Labyrinth seal is basically used in inter-stage seals of fan products. Axle end seals for conveying air are also used under low pressure.
2. Floating Ring Seal
Floating ring seal is to seal the axial leakage of working medium by forming pressure oil film between spindle and floating ring, and balancing the combined pressure of oil film with external load (working medium pressure). Because the floating ring seal has the advantage of automatically aligning the center, the seal clearance can be smaller, the leakage volume will be reduced, the pressure of the seal body can be adjusted with the pressure of the sealed medium, and the liquid rubbing state between the floating ring and the shaft can be maintained, thus avoiding mechanical wear.
This seal is used in high pressure or when conveying corrosive gas, to ensure that the conveying gas does not leak out.
3. Mechanical Seals
Mechanical end-face seal is a kind of sealing device that achieves axial rotation of the seal by pre-tightening the static and dynamic ring end-face rubbing pairs by elastic elements and pressing the pressure of medium and elastic elements. Mechanical seals generally use a sealing fluid (turbine oil) whose pressure is 2.5-3.5 higher than the sealed medium to seal the sealed medium. In the process of rotation, the friction surface establishes the oil film. The pressure of the oil film is from outside to inside, from large to small, and finally balances with the sealed medium. Because the sealing pressure is always greater than that of the sealed medium, the sealed medium generally does not leak, and there is a small amount of leakage from the sealed fluid inward. The leaked sealing fluid will be recycled through the oil return hole. Because of structural changes, the oil consumption of mechanical seals is much less than that of floating ring seals, but all of them belong to oil film seals.

Last article:What are the wide applications of side channel blower

Next article:Control Measures of Local Resistance in turbo blower