2022-07-20 15:26
Hospital sewage
Refers to the sewage discharged by hospitals (general hospitals, professional hospitals and other types of hospitals) to the natural environment or urban pipelines. Its water quality varies with the nature, scale and location of different hospitals. Each hospital bed discharges about 200-1000l of sewage every day. The main pollutants contained in hospital sewage are: pathogens (parasitic eggs, pathogenic bacteria, viruses, etc.), organic matter, floating and suspended solids, radioactive pollutants, etc. the total amount of bacteria in untreated raw sewage is more than 10^8 /ml. The principle of hospital sewage treatment is: separate the quality, separate the treatment locally, and eliminate the pollution at the nearest source. The main treatment methods are sedimentation and disinfection. The commonly used disinfectant in China is liquid chlorine. In order to improve the disinfection efficiency and do not produce secondary pollution, ozone method is often used for disinfection. After disinfection, it can meet the discharge standard. Lime disinfection and high temperature disinfection are often used for the sludge produced in the treatment process. 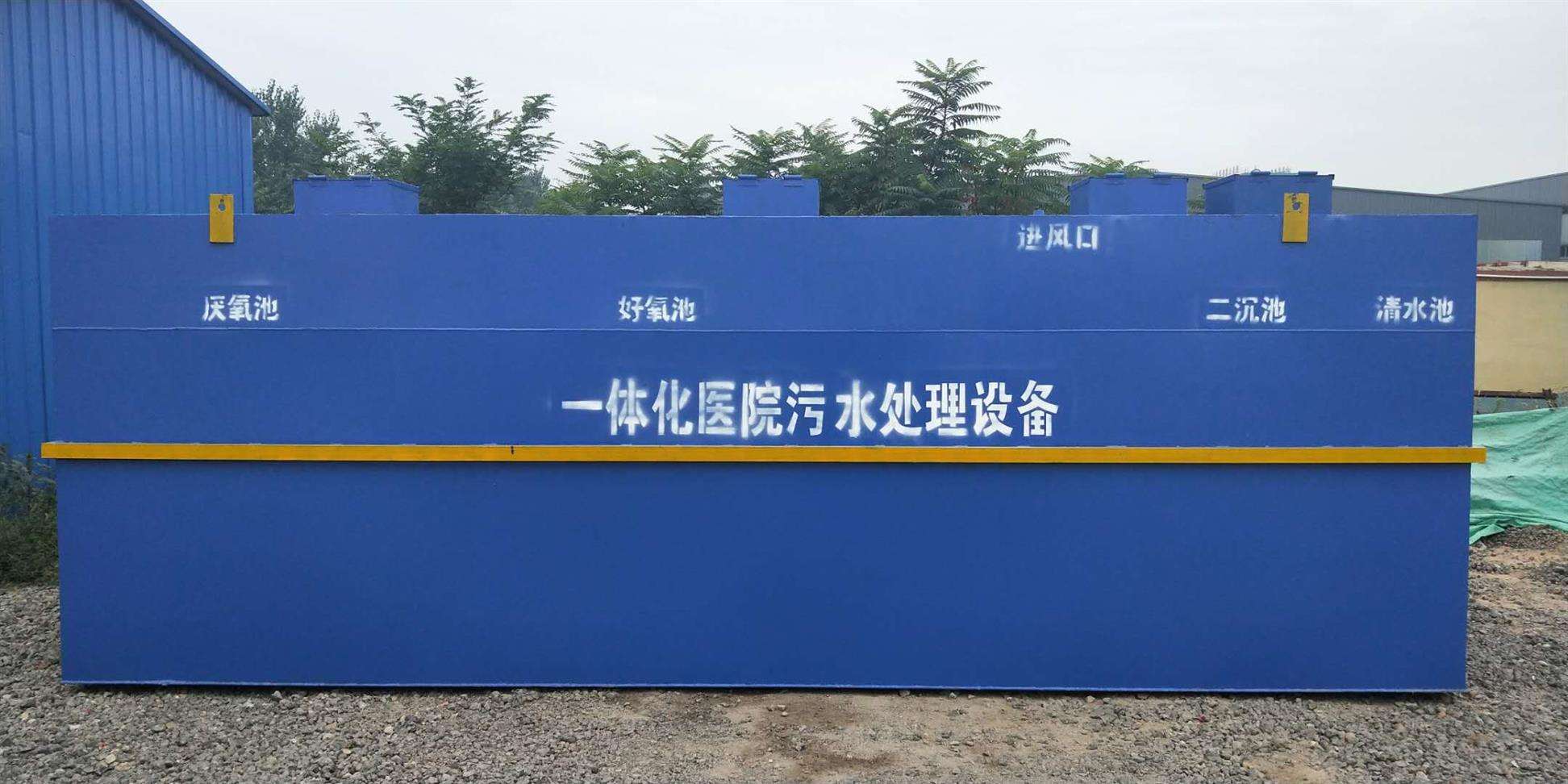 Hospital sewage, in addition to general domestic sewage, also contains chemical substances, radioactive waste water and pathogens. Therefore, it can only be discharged after treatment, especially the sewage discharged from infectious disease wards such as hepatitis can only be discharged after disinfection. Hospitals without centralized sewage treatment equipment must disinfect infectious faeces separately to make them harmless. Common disinfectants include chlorine dioxide, bleaching powder, liquid chlorine, sodium hypochlorite and ozone. Sewage containing radioisotopes should be treated according to the requirements of isotope treatment. During the treatment of hospital sewage, the precipitated sludge contains a large number of bacteria, viruses and parasitic eggs, which must be disinfected (usually disinfected with hydrated lime) or composted at high temperature.
The functions, facilities and personnel composition of each department of the hospital are different. The main departments and facilities that produce sewage include: consulting room, laboratory, ward, laundry, X-ray printing, animal room, isotope treatment and diagnosis, operating room and other drainage. The domestic sewage discharged by the hospital administration and medical staff, and the drainage of the canteen, single dormitory and family dormitory. The composition and quantity of sewage produced by different departments are different, such as heavy metal wastewater, oily wastewater, printing wastewater, radioactive wastewater, etc. Moreover, the sewage produced by hospitals of different natures is also very different. The discharge of hospital sewage is more complicated than that of general domestic sewage.
The source and composition of hospital sewage are complex, including pathogenic microorganisms, toxic and harmful physical and chemical pollutants and radioactive pollution. It has the characteristics of space pollution, acute infection and latent infection. Without effective treatment, it will become an important way for the spread of epidemic diseases and seriously pollute the environment.


Treatment process
According to the scale and nature of the hospital and the discharge direction of the treated sewage, the process selection is carried out. There are three main processes: primary treatment, secondary treatment and simple biochemical treatment to enhance the treatment effect. Hospital sewage treatment generally adopts the operation and management methods of engineering design, construction and acceptance. Its treatment facilities need a certain period of trial operation, and the treatment effect can achieve the expected purpose. Chemical treatment requires one month of trial operation, and secondary biochemical treatment requires more than three months of trial operation. Therefore, small general hospitals (mainly including urban health service communities and township health centers) urgently need to seek a technical scheme (equipment) with less capital investment, shorter construction cycle, and safe and reliable standards.
1) Physicochemical + biochemical methods are usually used for treatment, and the main processes are:   flocculation sedimentation (physicochemical) + hydrolytic acidification (biochemical) + deep oxidation (biochemical) + disinfection - discharge up to standard
Flocculation sedimentation (physicochemical) + hydrolytic acidification (biochemical) + MBR (biochemical) + disinfection -- > up to standard discharge
Physicochemical: it is mainly the harmful sediment that cannot be decomposed by microorganisms. Add flocculants, coagulants and other chemicals to the sewage, transfer the harmful substances to the sludge, and achieve the goal by treating the sludge.
Biochemistry: it refers to the ability of human beings to discover the decomposition of organic matter by microorganisms in natural water. It is analyzed and summarized that microorganisms in different environments can decompose different harmful substances. Generally, anaerobic bacteria + aerobic bacteria culture is adopted, that is, hydrolysis acidification and deep oxidation.
Disinfection method
There are many ways to disinfect hospital sewage, such as liquid chlorine method, ozone method, sodium hypochlorite method, chlorine dioxide method, etc. But the commonly used disinfection method is: chlorination method, which has the advantages of convenient dosing, low price and high reliability. Ozone method used for hospital sewage disinfection can effectively kill coliform, polio and other viruses. And it is not affected by the ammonia nitrogen content and pH value in the wastewater
Chlorination
Chlorination treatment can be divided into liquid chlorine method and chlorine dioxide method according to the difference of adding chloride.
Liquid chlorine disinfection is widely used in the disinfection of tap water and hospital sewage because of its strong disinfection ability and low price. The chlorine concentration of liquid chlorine is high, and the effective chlorine content is more than 99%, which is 5-10 times higher than that of sodium hypochlorite solution. However, chlorine is a yellow toxic gas with pungent odor, so special storage equipment and chlorination equipment must be provided. Typical chlorination equipment includes manual timed opening chlorination and automatic lifting chlorination. However, relevant data research shows that liquid chlorine (Cl2) will react with ammonia to produce monochloramine, dichloroamine and trichloramine, which consumes liquid chlorine, and can also form carcinogenic trihalomethane (THM). Coupled with the incompleteness of liquid chlorine, liquid chlorine disinfection is limited.
The solubility of chlorine dioxide (ClO2) in water is 5 times that of chlorine, and its oxidation capacity is about 215 times that of chlorine. It is a strong oxidant. It is internationally recognized as a high-efficiency disinfectant in chlorine disinfection. It can kill all microorganisms, including bacterial propagules, cell spores, fungi, mycobacteria and viruses. It can effectively destroy trace organic pollutants in water, such as benzopyrene anthraquinone, chloroform, carbon tetrachloride, phenol, chlorophenol, cyanide, hydrogen sulfide and organic sulfide. It can well oxidize some reduced metal ions in water, such as fe2+, mn2+, ni2+, etc. The advantage of chlorine dioxide is that it hardly produces divergent organic halides when reacting with humus and organic substances, does not produce and inhibit the formation of carcinogenic trihalomethanes, and does not react with ammonia and amino compounds. Units that need to treat hospital wastewater can also consult enterprises with similar sewage treatment experience on the service platform of sewage treasure project.
Ozone method
According to the amount of ozone generated, the manufacturing cost is also different. Generally speaking, the price of ozone generator is relatively expensive. As the discharge of hospital sewage is specified in gbj48-83 standard, intestinal pathogenic bacteria, tuberculosis bacilli and total coliform bacteria shall not be detected in the sewage discharged by the hospital, and shall not be greater than 500 per liter. Or when disinfecting with chlorination, take the contact time and the residual chlorine content in the outlet water of the contact tank as the standard. In addition, ozone disinfection is more expensive than chlorination.
Most hospitals use chlorination to treat hospital wastewater, especially liquid chlorine.

Last article：Instructions for installation, maintenance and use of roof blowers

Next article：Electroplating wastewater treatment by blowers